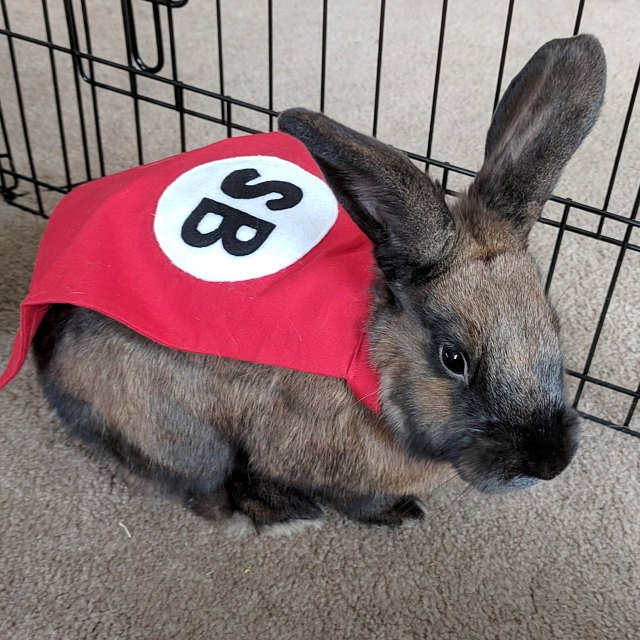 Here’s a little Easter egg for you: the story of Peter Rabbit rewritten in the style of a Marvel/DC action comic by none other than GEBen. GEBen didn’t provide any artwork, so you’ll have to make do with the photo above. The research team at CDCAAHFA suspects GEBen was actually writing a screen treatment in the hopes that some idiot in Hollywood would pick it up. Hence no artwork. I wonder, however, if this isn’t simply a piece of fan-fiction. Happy Easter!

Once upon a time there were four little Rabbits, and their names were Flopsy, Mopsy, Cottontail and Peter. They lived with their Mother in a sand-bank, underneath the root of a very big fir tree.

“Now, my dears,” said old Mother Rabbit one morning, “You may go into the fields or down the lane but never, ever, EVER go into Mr. MacGregor’s garden. Now run along and don’t get into mischief. I am going out.”

Mother Rabbit went out to the grocer’s and Flopsy, Mopsy and Cottontail, who were good little bunnies, went down the lane to gather blackberries.

But Peter was a teen-aged rabbit, full of undefined angst and pointless rebellion, due partly to the absence of a father-figure and partly to a lazy writer who couldn’t bother to come up with a better excuse. And so Peter ran straight away to Mr. MacGregor’s garden and squeezed under the gate!

“Paradise,” Peter thought as his eyes took in the wealth of green goodness growing all around him. “Mother was silly to stop us from coming here.” He dove straight into the lettuce and chewed his way through an entire row. Then he spied the spicey tops of radishes poking seductively out of the ground just a few feet away.

But as Peter made his way towards the forbidden vegetables, a shadow fell over him. He looked up to see a giant holding a massive cabbage in one hand and brandishing a spade in the other. Sunlight glinted off the razor-sharp edge of the spade as the giant roared. “What have we here? A little rabbit in my garden! But you look ripe for the picking. You’ll make a lovely morsel to put in my pie tonight!”

“Is that sunlight on the spade?” Peter wondered for a moment. “It looks more like…” A crack of thunder shattered his thoughts and it was only his superhuman (though absolutely average for a rabbit) reflexes that let him leap out of the path of the lighting bolt just in the nick of time.

“What the fu…” Peter almost said, but cut his words short because his mother had taught him to be a polite rabbit. That, and the fact that comic books are written for younger readers. Also, Peter could already see the electricity crackling around Mr. MacGregor’s spade again. Peter was most dreadfully frightened and, as the spade swung towards his head, he rushed willy-nilly all over the garden.

“Come back here!” Mr. MacGregor bellowed. “I’ll confit your legs in duck fat!” But he was too slow to catch Peter, who fled as fast as his four feet could carry him.

Try as he might, Peter couldn’t find the garden gate. He began to panic and had almost given himself up for lost when he spied the tool shed. Without a moment’s hesitation, Peter rushed into the shed and jumped in a can. It was filled with water but, still, Peter could hear Mr. MacGregor at the shed door and the can was an excellent place to hide.

“Think you’re clever, eh?” Mr. MacGregor growled. “But you can’t hide from me, little rabbit.” Peter could hear Mr. MacGregor moving about, checking behind plant pots and under boxes. “I saw you, little rabbit. You look like one of that brood from under the fir tree. I thought you lot had learned to stay away from here.” Mr. MacGregor’s footsteps were getting closer. “Or didn’t your mother tell you,” Mr. MacGregor picked up Peter’s can and looked inside, “how I hasenpfeffered your father.”

For one, split second, their eyes met. Peter stared in horror, stunned both by Mr. MacGregor’s revelation and also by the blue flashes of lighting that danced at the edges of Mr. MacGregor’s eyes.

“I would’ve preferred you stuffed with mushrooms and herbs,” Mr. MacGregor cackled, “but electrocuted in a can will do just fine.”

As the lighting shot out of Mr. MacGregor’s eyes and arced around the can, Peter was already moving. He almost made it out, almost made it to freedom, but one last bolt of electricity caught him and Mr. MacGregor laughed as Peter fell, twitching, smouldering, and green, at the farmer’s feet.

“Green?” Mr. MacGregor muttered. He glanced at the can in his hand, at the label that said, “Slug Killer. Danger: Contains Radioactive Biohazard Mutant Alien Genes. Keep away from pets.” Then he looked back at Peter, just as the last sparks of lightning fizzled out in his fur.

The fur was moving. No, on closer inspection, something under the fur was moving. The muscles were shifting, changing, growing. And before Mr. MacGregor could shout, “Ma, get the pressure cooker going. We’re having fricassee tonight,” Peter was on his feet and out the shed door like a shot.

“You won’t get away that easy!” Mr. MacGregor roared. He chased after Peter, loosing blast after blast of blue lighting across the garden. But Peter was fast. Faster than he had ever been before. And he was green. He blended into the cabbage and broccoli and spinach and Mr. MacGregor had a hard time seeing him.

In a rage, Mr. MacGregor unleashed his lighting at everything that moved. Unfortunately, he forgot that his cat, a beloved companion of many years (and an excellent ratter, to boot) had been passing the day eyeing up the goldfish in the pond. All of the rukus had stirred the cat’s curiosity, however, and when it poked its furry head out from under a bean trellis, Mr. MacGregor sent precisely enough electricity through it to kill it nine times over. Poor cat.

With Mr. MacGregor distracted by the loss of his cat, Peter leapt over the garden wall and zipped down the lane faster than a hound after a…well, you get the idea. He never stopped running until he got home to the big fir tree.

His mother wondered why he was green but, I’m sorry to say, Peter was not feeling well that evening, so she put him to bed and gave him some chamomille tea. But Flopsy, Mopsy and Cottontail had bread and milk and raspberries for supper!

And all night long, all Peter could think was, “Someday soon, Mr. MacGregor, I’m coming for you.”