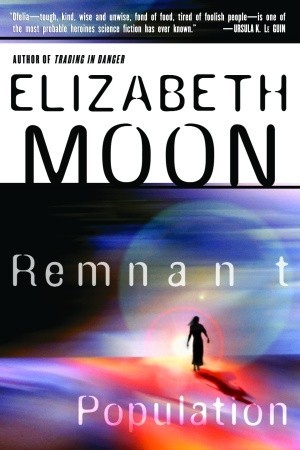 Remnant Population tells the story of a woman who stays behind on an alien world when all of her fellow humans abandon a failed colony. Imagine the love-child of Robinson Crusoe and Enemy Mine with Ursula K. LeGuin acting as midwife and you’ll get some idea as to what to expect from Remnant Population.

There is much to praise in this book, starting with the main character, Ofelia. You will not find her like anywhere else in sci-fi/fantasy. Part of me wants to describe her to you but another part wants you to discover her for yourself, so I’ll say only that Ofelia is the entirely believable portrait of a conservative grandmother with hippie tendencies. Her joints may be stiff, her back may be sore and she may want a nap but, still, her actions carry the story with elegance, grace and a light touch of whimsy. You won’t forget her anytime soon.

The book also starts off with an interesting premise: humans are abandoning their failed attempt to colonize an alien world. As one of the original colonists, Ofelia decides she’s had enough of civilization so she’s going to stay behind to finish her days tending her garden. There are no alien overlords, no galactic crises, no rogue AI. Just an old woman and her struggles against the slimerods that want to eat her tomatoes.

If you’re into explosions, blood-curdling evil and fantastic gizmos, this might not be the book for you. But if you’re looking for something that stands out from the usual fare, this may do the trick.

It isn’t all good and glorious; the last half of the novel includes a number of stock-character types—the noble savage, the inept/overly ambitious corporate shill, to name two—and the story turns a bit formulaic and predictable. Moon does have a few twists to her story, though, and even if the overall direction of the story is predictable, it’s still fun seeing how Ofelia finds her way to the end.